The Northeast’s largest hardscape competition,
now in our 5th Year – See You There!

This competition is intended to test and recognize the skill, dedication and passion of hardscape contractors from New England and the Tri-State region. Each team that competes in the championship will have an understanding of the industry’s best practices and guidelines (safety, quality & craftsmanship) and will be tested in a race against the clock and other top installers in the industry. This championship will determine the best of the best in the hardscape industry! The winning team will represent the Northeast at the HNA Installer Competition.

There will be two Preliminary Rounds of 8 teams each. The 4 teams with the highest score from the first day will advance to the Championship Round to take place the following day.

Between each preliminary round, each construction area will be returned as close as possible to its original state by the participating team, so the subsequent team may compete without any noticeable advantage or disadvantage.

During the preliminary round(s) each team’s score will be calculated based on completeness, compliance to industry guidelines, safety, quality and craftsmanship by each judge as detailed in the Preliminary Round Judging Form.

The team’s Preliminary Round Total Score will be the sum of their score from all judges during the preliminary round.

At the end of the preliminary round(s), each team will be ranked based on their Preliminary Round Total Score. The four teams with the highest total scores will advance to the Championship round.

During the Championship round, each team will be given ninety (90) minutes to complete their construction, according to their own creative design in the assigned construction area using the materials provided.

During the Championship round each team’s score will be calculated based on completeness, compliance to industry guidelines, safety, quality, craftsmanship and creativity as detailed in the Championship Round Judging Form by each judge.

The team’s Championship Round Total Score will be the sum of their scores from all judges during the Championship round.

At the end of the Championship round, each team will be ranked based on their Championship Round Total Score. In the case of a tie, the judges will determine the final ranking.

The team ranked highest will be declared the “Regional Installer Champion.” 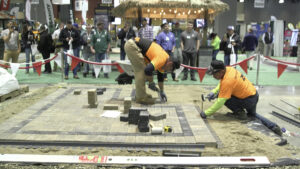